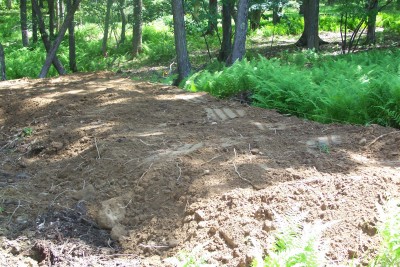 While it is possible to build a soil to qualify for a future sewage system, doing it RIGHT takes special skill and attention! One of costliest “bum steers” an SEO or agency official can offer the owner of a “flunked” shallow-limiting zone site is “just add the missing soil thickness and wait 4 years!”  No guidance or specifications.  There is no real DEP program to create soils for new septic system permits.  This strategy is based on a loophole for excluding disturbed soils until after 4 years of settling.

We find these ABOMINATIONS 4+ years later, sometimes with a flooded “mote” around the soil piles, where the material had been removed. The filled areas area often built of tight, “mottled” (color patterns formed by poor drainage) soils. One client with a lakefront lot had spent $10,000 on two optional “soil fills,” only to learn 5 years later that both piles flunked. Meanwhile, our investigation found 20-inch limiting zone soils on her lot that were missed by the SEO! Another client built a dozen of these no-good bumps for a future subdivision!  When we investigated years later, we avoided the site disturbance and accomplished the subdivision with shallow limiting zone sites.

Success in building a future soil for a qualified sewage system site is dependent on supervision by a CERTIFIED PROFESSIONAL SOIL SCIENTIST to evaluate the source material and destination site, and to supervise the site preparation, transport, soil placement, and vegetative stabilization. Agency officials must witness and document the dates.

We are always amazed how often SEOs neglect to mention DEP “Onlot Alternate Technology” web-listed systems as a solution for steep slopes and shallow soils.